The so-called "smurf" technique is based on the use of broadcast servers to paralyze a network. A broadcast server is a server capable of duplicating a message and sending it to all machines present on the same network.

The scenario of such an attack is as follows:

As such, when the attacking machine sends a request to several broadcast servers located on different networks, all of the responses from computers on the various networks will be routed to the target machine. 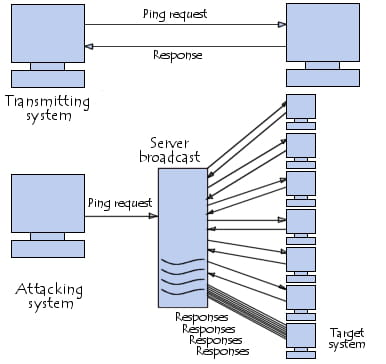 In this way the bulk of the attacker's work involves finding a list of broadcast servers and falsifying the response address in order to direct them to the target machine.

This document, titled « Smurf attack », is available under the Creative Commons license. Any copy, reuse, or modification of the content should be sufficiently credited to CCM (ccm.net).