A graphics card, sometimes called a graphics adapter, video card or graphics accelerator, is a computer component which converts digital data into a graphical form which can be displayed on a monitor.

The initial role of a graphics card was to send pixels to a screen, as well as a variety of simple graphical manipulations: 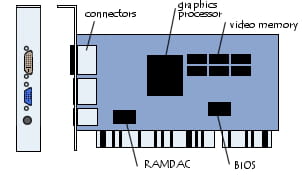 A video card's main components are:

The field of 3D is much more recent, and is becoming more important. Some PCs can now compute faster than certain workstations.

Computing a 3D scene is a process which is roughly divided into four steps:

The better the 3D accelerator card can compute these steps by itself, the faster it can be displayed. The first chips could only render, letting the processor take care of the rest.
Since then, graphics cards have included a "setup engine", which handles both of the last two steps.
For example, a 266 Mhz Pentium II which computes the first three steps can process 350,000 polygons per second; when it only computes two, it can reach 750,000 polygons per second.
This demonstrates how much of a load these cards remove from the processor.

The type of bus is also an important factor. While an AGP bus doesn't improve 2D images, cards that use that bus instead of the PCI bus are higher-performance. This is due to the fact that an AGP bus is directly linked to the RAM, which gives it much higher bandwidth than a PCI bus.

These high-technology products now require the same manufacturing quality as processors do, as well as etching between 0.25 Âµm and 0.35 Âµm in width.

This document, titled « Graphics cards - Video cards », is available under the Creative Commons license. Any copy, reuse, or modification of the content should be sufficiently credited to CCM (ccm.net).