Latest update on Sunday 7 October 2012 à 14:35 by Jean-François Pillou.
The Compact Disc was invented by Sony and Philips in 1981 in order to serve as a high-quality compact audio storage device which allowed for direct access to digital sound tracks. It was officially launched in October 1982. In 1984, the Compact Disc's specifications were extended (with the publication of the Yellow Book) so that it could store digital data.

A CD (Compact Disc) is an optical disc 12cm in diameter and 1.2mm thick (its thickness may vary from 1.1 to 1.5 mm) for storing digital information: up to 650 MB of computer data (equivalent to 300,000 typed pages) or 74 minutes of audio data. A circular hole 15mm in diameter is used to centre it on the CD player's surface.

The makeup of a CD

A CD is built from a plastic (polycarbonate) substrate and a fine, reflective metallic film (24-carat gold or a silver alloy). The reflective layer is then covered with an anti-UV acrylic finish, creating a protective surface for data. Finally, an additional layer may be added so that data can be written on the other side of the CD as well.

The reflective layer contains tiny bumps. When the laser passes over the polycarbonate substrate, light is reflected off the reflective surface, but when the laser reaches a bump, that's what allows it to encode information.

This information is stored in 22188 tracks engraved in grooves (though it's actually just one track spiralling inward).

Commercially purchased CDs have already been pressed, meaning that the bumps have been created used plastic injected into a mold which contains the desired pattern in reverse. A metallic layer is then affixed onto the polycarbonate substrate, and this layer is itself covered with a protective coating.

Blank CDs (CD-R), by contrast, have an additional layer (located between the substrate and metallic layer) made of a dye which can be marked (or "burned") by a high-powered laser (10 times as powerful as the one used for reading them). It is the dye layer which either absorbs or reflects the beam of light emitted by the laser.

The most commonly used dyes are:

As the information is not stored as pits but as colored marks, a pre-groove is placed in the blank disc to help the burner follow the spiral path, so that precision engineering is not needed on CD burners.
What's more, this pre-groove follows a sine wave called a wobble, with an amplitude of +/-0.03µm (30nm) and a frequency of 22.05kHz. The wobble lets the burner know what speed it needs to record at. This information is called ATIP (Absolute Time in Pre-Groove).

The read head is made of a laser (Light Amplification by Stimulated Emission of Radiation) which emits a beam of light, and a photoelectric cell which captures the reflected beam. CD players use an infrared laser (with a wavelength of 780 nm), as it is compact and inexpensive. A lens located near the CD focuses the laser beam onto the pits.

A semi-reflective mirror allows the reflected light to strike the photoelectric cell, as shown in the following diagram: 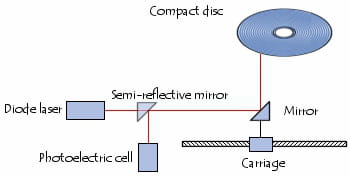 A "pickup" moves the mirror so that the read head can access the entire CD-ROM.

The physical track is made up of bumps 0.168µm deep and 0.67µm wide, with variable length. The "rings" in the spiral are spread about 1.6µm apart from one another. Pits are the term for the depressions in the groove, and lands are the spaces between them.

Since the depth of the groove is one quarter the wavelength of the laser beam, a light wave reflected by a pit travels half again as long (125% as long to hit the disk and the same to return) as a wave reflects by a land.

This way, whenever the laser strikes a pitted groove, the wave and its reflection are dephased by a half wavelength and cancel one another out (destructive interference), so it's as if no light was reflected at all. Moving from a pit to a land causes a drop in the signal, which represents one bit.

The length of the groove is what stores the information. The size of a bit on a CD ("S") is standardized and corresponds to the distance travelled by the light beam in 231.4 nanoseconds, or 0.278µm and the standard minimum velocity of 1.2 m/s.

In the EFM standard (Eight-to-Fourteen Modulation), used for storing information on a CD, there must always be at least two bits set to 0 between two consecutive 1 bits, and there cannot be more than 10 consecutive zero bits between two 1 bits, in order to avoid errors. This is why the length of a groove (or a land) is greater than or equal to the length needed to store the value OO1 (3S, or 0.833µm) and less than or equal to the length of the value 00000000001 (11S, or 3.054µm).

There are numerous standards describing the ways in which information must be stored on a compact disc, depending on how it is to be used. These standards are set out in documents called books, each of which has a color assigned to it:

The Orange Book dictates that a CD-R, whether it is an audio CD or a CD-ROM, is made up of three areas which form the information area:

Besides the three areas described above, a CD-R contains a PCA (Power Calibration Area) and a PMA (Program Memory Area), which together form the SUA (System User Area).

The PCA can be seen as a testing area for the laser, so that it can calibrate its power depending on the kind of disk being read. This area is what makes it possible to sell blank CDs that use different dyes and reflective layers. Each time it is readjusted, the burner notes that it has carried out a test. Up to 99 tests are allowed per disc.

The format of the CD (or more precisely, the file system) describes how the data is stored in the program area.

The earliest file system for CDs was the High Sierra Standard.

The ISO 9660 format, standardized in 1984 by the ISO (International Standards Organization) revisited the High Sierra Standard in order to define the structure of files and folders on CD-ROMs. It is divided into three levels:

Microsoft has also defined the Joliet format, an expansion of ISO 9660 which allows long file names (LFNs) of up to 64 characters, including spaces and accented characters (based on Unicode).

The ISO 9660 Romeo format is a naming option offered by Adaptec, independent of Joliet, for storing files whose names can be as long as 128 characters, but which does not support Unicode encoding.

The ISO 9660 RockRidge format is a naming extension to ISO 9660 which makes it compatible with UNIX file systems.

In order to make up for the limitations of ISO 9660 (which make it unsuitable for DVD-ROM discs), the OSTA (Optical Storage Technology Association) has developed the ISO 13346 format, known under the name UDF (Universal Disk Format).

A CD-ROM drive is defined by the following:

This document, titled « CD, CD audio and CD-ROM », is available under the Creative Commons license. Any copy, reuse, or modification of the content should be sufficiently credited to CCM (ccm.net).