Introduction to the keyboard

The keyboard, like a typewriter, is used for entering characters (such as letters, numbers, and symbols). It is an essential input device for a computer, as it is what lets us enter commands.

The term "QWERTY" (after the first six letter keys on the keyboard) refers to the type of keyboard which is used with nearly all computers in the English-speaking world. In other countries, keyboard layouts are different.

The Qwerty keyboard was designed in 1868 in Milwaukee by Christopher Latham Sholes, who placed the keys corresponding to the most commonly used letter pairs at opposite ends of the keyboard, in order to prevent the typewriter hammers of the time from becoming jammed with one another. This keyboard was first sold by the company Remington in 1873. Therefore, the Qwerty keyboard was designed from a purely technical perspective, hindering usability and efficiency. Legend has it that the placement of keys along the first row of the Qwerty keyboard was motivated by typewriter dealers of the time, who wanted all the keys needed to type the word "typewriter" to be conveniently located when demonstrating the product.

In 1936, August Dvorak (a professor at the University of Washington) created a keyboard whose keys were arranged solely with efficiency in mind. The Dvorak keyboard placed all the vowels of the alphabet and the five most common consonants on the central row so they could be easily accessed, while also evenly dividing the work between the left and right hands. What's more, the most frequent letters of the alphabet were placed at the centre of the keyboard.

Various studies showed that the increased efficiency of the Dvorak keyboard was small in practice and that the amount of effort required to switch from the Qwerty keyboard to Dvorak's was too much to be worth the trouble, which explains why all computers today still have Qwerty keyboards.

Keyboards are generally plugged into the rear of the CPU, on the motherboard, using a purple PS/2 connector:

Whenever a key is pressed, a specific signal is transmitted to the computer. The keyboard uses a crossbar network to identify every key based on its row and column 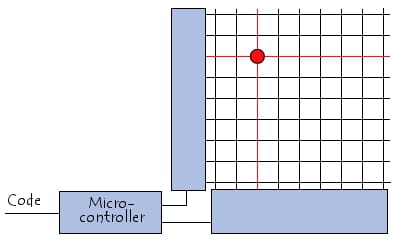 When a key is pressed, an electrical contact is formed between the row and column. The electric signals are transmitted to a microcontroller, which sends a code (BCD, ASCII or Unicode) to the computer describing the character which corresponds to that key.

There are four types of keyboards for PCs. The first three were invented by IBM, while the latter is the result of changes made when Microsoft Windows 95 was released. These are the four kinds of keyboards:

This was the first keyboard for the PC, and was unusual in that it was separate from the computer, unlike the other computers of the time (such as the Apple II and the Amiga), whose keyboards were integrated within them.

This keyboard included 83 keys, but was criticised for the arrangement of the keys and their disproportionate size (especially the Shift and Enter keys, which were too small and poorly placed). What's more, communication between the keyboard and the CPU was one-way, meaning that the keyboard couldn't include an LED indicator.

The PC/AT keyboard, which had 84 keys, was introduced for the PC/AT computer in 1984.

This keyboard corrected the errors of its predecessor, largely by resizing the Shift and Enter keys. Additionally, the keyboard was bidirectional, meaning that it could display its status using LED indicator lights. Finally, the motherboard on the PC/AT included a controller for adjusting the settings:

The new IBM-compatible computers launched in 1986 came with 102-key keyboards.

This new keyboard included different blocks of keys: Starting with this model, the function keys were moved to the top of the keyboard, while cursor control keys, represented by arrows, were added.

Microsoft has defined three new keys, which are used for shortcuts to certain Windows features.

These three new keys are, from left to right:

Here are a few shortcuts using these new keys:

This document, titled « The keyboard », is available under the Creative Commons license. Any copy, reuse, or modification of the content should be sufficiently credited to CCM (ccm.net).