Introduction to the DVD format

The DVD (Digital Versatile Disc, or less commonly Digital Video Disc) is an "alternative" to the compact disc (CD) with six times as much storage space (for the lowest-capacity kind of DVD -- single-layer, single-sided). The DVD format was designed to provide a universal storage medium, while the CD was originally designed as an audio medium only.

The DVD is designed to make data addressable and accessible at random (non-sequentially). It has a complex structure which provides greater interactivity, but requires more advanced microprocessors

A DVD can easily be confused with a CD, as both are plastic discs 12 cm in diameter and 1.2 mm thick, which are read using a laser beam. However, CDs use an infrared laser with a wavelength of 780 nanometres (nm), while DVD burners use a red laser with a wavelength of 635 nm or 650 nm. What's more, CD players generally use a lens with a focus of 0.5, while the lenses of DVD players have a focus of 0.6. For this reason, DVDs have grooves whose minimum height is 0.4µ with a pitch of 0.74µ, as opposed to 0.834µ and 1.6µ for a CD. 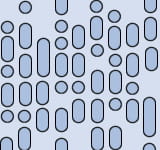 The main reason to use DVDs is their storage capacity, which makes them an excellent medium for video. A 4.7GB DVD can store more than two hours of compressed video in MPEG-2 (Motion Picture Experts Group), a format used for compressing images while still keeping them high-quality.

DVDs exist in both "single layer" and "dual layer" (DL) versions. Dual layer discs are made up of a translucent, gold-based semi-reflective layer and an opaque, silver-based reflective layer, separated by a bonding layer. In order to read both these layers, the drive has a layer which can change its intensity by modifying its frequency and focus:

The inner layer, however, has a lower density. Additionally, it stores the information "upside down" on an inverted spiral, in order to limit latency when moving from one layer to the other. 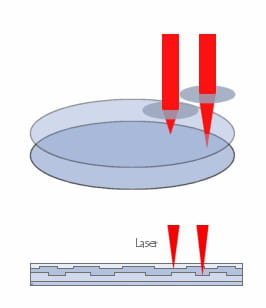 What's more, DVDs exist both in single-sided and double-sided versions, like vinyl records. In the latter case, the information is stored on both sides of the disc.

DVD discs are generally divided into four families, each with different storage capacities depending on their physical characteristics:

The official specifications for DVD are divided into five books:

These three formats are incompatible with one another, despite their similar performance. The DVD-RAM format will not be discussed at length here, as it is mainly used in Japan. The DVD-R(W) and DVD+R(W) formats, on the other hand, are widely used in Europe and North America.

The DVD-R/DVD-RW format is based on what is known as "pre-pit" technology. As with CD-Rs, writeable and rewriteable DVDs use a "pre-groove" (a spiral groove already engraved on the disc), which follows a sine wave called a wobble. The pre-groove defines the position for the record head to be placed on the disc (called tracking) while the oscillating frequency lets the burner adjust its speed. Address information (i.e. where the data is located), by contrast, is defined using recesses pre-engraved onto the disc in the pits between the disc's groove, called "land pre-pits" (or LPP for short). 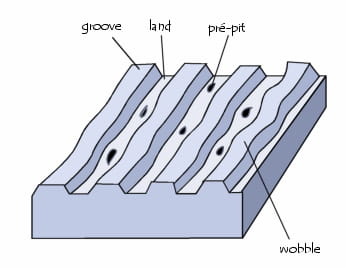 Pre-pits form a second signal, which used for positioning data. When the laser reaches a pre-pit, an amplitude peak appears in the oscillation, which lets the burner know that data must be recorded The DVD-R specifications make it clear that a pre-pit must be at least one period long (1T).

The DVD+R/DVD+RW format uses a groove whose oscillation (wobble) has a much higher frequency than DVD-Rs (817.4 kHz for DVD+R versus 140.6 for DVD-R) and handles addresses by phase-modulating the wobble, a kind of phase-inversion encoding called ADIP (ADdress In Pre-groove). This phase inversion takes place every 32 periods (32T).

The DVD+RW format has an error-correction feature called DVD+MRW (Mount Rainier for DVD+RW) used to mark defective blocks. What's more, if readable data is found on that block, there is a mechanism for moving them to a healthy block and updating the file allocation table (this process is called Logical to Physical Address Translation).

What's more, the specifications provide for a check to run in the background, in order to check errors found on the disc while the reader is inactive. The user can still read the disc or eject it at any time; if this happens, the error check will continue where it left off as soon as the player is idle again.

Difference between DVD+ and DVD-

Generally speaking, the address method used by DVD+R (phase modulation) has a higher resistance to electromagnetic disturbances than the pre-pit method. When writing a disc, the write head must also read the pre-pits in order to position the data in the right place. Thus, the light emitted by the laser may cause disturbances.

What's more, given the period which corresponds to the length of a pre-pit (T1), the pre-pits are much harder to detect when the disc is being read more quickly. So it's not surprising that the first 16x burner on the market was DVD+RW.

This is why the DVD+R(W) format, for more recent technological specifications, offers better performance as well as additional features. On the other hand, DVD-R(W) has been ratified by the DVD Forum and was the first format used, so the majority of DVD drives (and especially DVD players) are compatible with it.

Most DVD burners support both formats. In conclusion, given that it is more compatible with standalone DVD players, DVD-R(W) is preferred for creating Video DVDs, while DVD+R(W) is superior for creating data discs.

The term "DVD DL" (DVD Dual Layer) refers to DVDs which can be recorded on two separate layers. These discs, which have more storage space than single-layer DVDs, use a technology similar to that of DVD-9 (dual-layer discs).

A DVD is essentially made up of three zones, which represent the information area:

Besides the three areas described above, a recordable DVD contains a PCA (Power Calibration Area) and an RMA (Recording Management Area) located before the Lead-In Area.

The PCA can be seen as a testing area for the laser, so that it can calibrate its power depending on the kind of disc being read. This area is what makes it possible to sell blank CDs that use different dyes and reflective layers. Each time it is readjusted, the burner notes that it has carried out a test. Up to 99 tests are allowed per disc.

DVDs use the file system UDF (Universal Disk Format). In order to remain somewhat compatible with older operating systems, a hybrid file system called "UDF Bridge", which supports both UDF and the ISO 9660 file system used by CD-ROMs, has been created. Nonetheless, it is important to note that DVD video and audio players do not support UDF.

Structure of a video DVD

A video DVD may contain data for standalone DVD players, as well as additional data that can be read by a computer.

A video DVD has a hierarchical folder organization for storing video and audio data. It normally relies on the following structure:

The main directory, named VIDEO_TS (for Video Title Sets), holds the DVD video files. The AUDIO_TS directory is for DVD audio, but it is sometimes required by certain DVD players. JACKET_P contains images of the DVD's cover art. Lastly, you can also add other folders to it, which can be read by a computer.

A video DVD is made up of a certain number of elements found in the VIDEO_TS directory:

The "video titles" may be films, videos or albums. A title is made up of "Video Object Block Sets" (VOBS), each containing:

The VIDEO_TS directory usually contains three types of files with the following extensions: 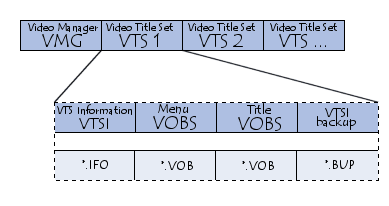 Video DVDs are designed to only be readable in certain parts of the world, which has been divided into regions (originally meant to limit the distribution of bootlegs). Theoretically, it is impossible to play a DVD from one region on a player from a different one. However, nearly all computer DVD drives and many standalone players can be made "region-free" using special tools.

This document, titled « DVD, DVD audio and DVD-ROM (DVD-R, DVD-RW, DVD+W, DVD+RW) », is available under the Creative Commons license. Any copy, reuse, or modification of the content should be sufficiently credited to CCM (ccm.net).