Flat-screen monitors (also called FPDs for Flat panel displays) are becoming more and more widespread, as they take up less space and are less heavy than traditional CRT monitors.

LCD (Liquid Crystal Display) is based on a screen made up of two grooved transparent parallel plates, oriented at 90° to one another; the space between them holds a thin layer of liquid containing certain molecules (liquid crystals) which change direction when they are exposed to electrical current.

Combined with a source of light, the first plate acts as a polarizing filter, letting through only those light components whose oscillation is parallel to the grooves. 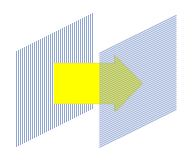 In the absence of electrical current, the light is blocked by the second plate, which acts as a perpendicular polarising filter. 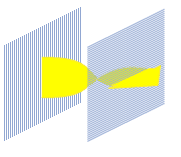 When powered, the crystals align one by one in the direction of the electric field, and can cross the second plate.

By locally controlling the orientation of the crystals, it is possible to make pixels. There are normally said to be two types of flat screens, depending on which control system is used to polarise the crystals:

The most common technology for this kind of display is TFT (Thin Film Transistor), which can control every pixel using three transistors (which correspond to the 3 RGB colors). Under this system, the transistor coupled with each pixel can memorise its state, and keep it lit between refreshes. Active matrix monitors are brighter and display a sharper image. Whether the monitors are active or passive, they need a light source to function. The following terms define how the screen is lit:

Plasma technology (PDP, Plasma Display Panel) is based on emitting light by exciting gases. The gas used in plasma screens is a mixture of argon (90%) and xenon (10%). Gas is contained within cells, each one corresponding to a pixel that corresponds to a row electrode and column electrode, which excite the gas within the cell. By modulating the voltage applied by the electrodes and the frequency of excitation, up 256 luminous values can be defined. The gas excited this way produces ultraviolet radiation (which is invisible to the human eye). With blue, green, and red phosphors distributed among the cells, the ultraviolet radiation is converted into visible light, so that pixels (made up of 3 cells) can be displayed in up to 16 million colors (256 x 256 x 256).

Plasma technology can be used to create large-scale high-contrast screens, but plasma screens are still expensive. What's more, power consumption is more than 30 times higher than for an LCD screen

The most common specifications for monitors are:

This document, titled « Flat monitor », is available under the Creative Commons license. Any copy, reuse, or modification of the content should be sufficiently credited to CCM (ccm.net).