What is a Modem used for?

A modem is the peripheral used to transfer information between several computers over a wire transmission medium (e.g. telephone lines). Computers operate digitally using binary language (a series of zeros and ones), but modems are analogue. The digital signals pass from one value to another. There is no middle or half-way point. It is "All or Nothing" (one or zero). On the other hand, analogue signals do not move "in steps", but rather continuously.

For example, a piano works more or less digitally because there are no "steps" between notes. Conversely, a violin can modulate its notes to pass through all possible frequencies.

A computer operates like a piano and a modem like a violin. The modem converts binary information from the computer into analogue information in order to modulate it over the telephone line. You can hear bizarre noises if you turn up the sound from the modem.

Thus, a modem modulates digital information on analogue waves. In the opposite direction, it demodulates analogue data in order to convert them into digital data. The word "modem" is an acronym for "MOdulate/DEModulate". 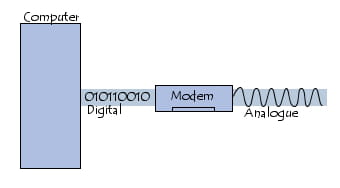 A modem's transmission speed is generally expressed in bauds, in tribute to Emile Baudot (11 September 1845 - 28 March 1903), a famous French engineer who worked in the area of telecommunications. This unit of transmission speed characterises the frequency of (de)modulation, i.e. the number of times the modem makes the signal change status per second. Thus, the bandwidth in bauds is not quite equal to the bandwidth in bits per second because a signal status change may be necessary to encode a bit.

As modems proliferated, the need increased for standardized protocols for communication by modem, so that all the protocols would use a common language. This is why two organizations developed communication standards:

The goal of the ITU is to define international communications standards. Modem standards can be divided into 3 categories:

Here is a list of the main modem standards:

Related
This document, titled « Modem », is available under the Creative Commons license. Any copy, reuse, or modification of the content should be sufficiently credited to CCM (ccm.net).
Previous