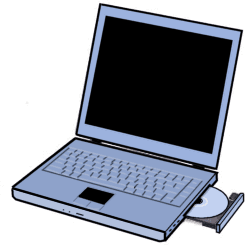 However, given its reduced size, most of a laptop computer's pieces are integrated and therefore cannot be changed. This is why users must choose their laptop's characteristics once they are well-informed and have their planned use in mind. On the other hand, the fact that the manufacturer integrates the components allows for reduced risk of hardware incompatibilities (hardware conflicts).

What is a Laptop Computer?

A laptop computer (also called notebook computer) is a computer that integrates all the elements that needs to run properly, including a battery power supply, a screen and a keyboard, in a small casing (on average 360 cm x 40 cm x 270 cm).

The main advantage of a laptop computer versus a desktop computer is its mobility as well as its reduced size. On the other hand, the price is generally higher for slightly less impressive performance and the laptop's hardware configuration is much less adaptable, even though it is possible to connect additional external peripherals thanks to its numerous I/O ports. Therefore, the motivation for buying a laptop computer must above all be a need for mobility or a need to save space.

Moreover, with the emergence of wireless networks, and WiFi in particular, it is becoming very easy to connect to the Internet in public Hot-Spots or simply in any room of your home as long as it is equipped with a WiFi terminal.

For advanced multimedia uses (e.g. digital video manipulation, connecting a digital camera or an mp3 player, etc.), the choice should fall on both the computer's performance (both graphic as well as computing power) and on the types and number of I/O ports that are available.

The processor represents the computer's brain in that it processes the instructions. Its execution speed depends on its frequency (in MHz), but two processors from different brands that have very different frequencies can perform equally.

What is more, the quantity of random access memory (RAM) can have a considerable effect on performance, notably when it comes to multimedia use. In addition to the quantity of memory, it is also important to pay attention to its working frequency, which corresponds to the frequency that most of the peripherals will run on.

The screen is distinguished first of all by its size, which is expressed in inches (an inch equals 2.54 cm) and corresponds to the screen's diagonal length. Unlike screens with cathode ray tubes (CRT screens), the diagonal length of a flat screen corresponds to the effective display area. Moreover, considering the liquid crystal based technologies used in flat screens, the screen quality of a flat screen can be defined by the response time, which is the length of time necessary to turn a pixel from white to black and then back to white.

The display format is generally 4:3 (i.e. 4 units wide to 3 units high), but there are more exotic laptop display formats that are close to 16:9, such as 15:10, which is adapted to viewing video sequences (e.g. watching DVDs). In general, this type of screen has does not have a whole number diagonal length (e.g. 15.4 inches).

The hard drive is the area where all the computer's data is stored unlike the RAM, which is a volatile memory that only acts as an information transit area while the computer is running. The most important characteristic of the hard drive is its capacity (expressed in gigabytes), because it determines the amount of data (and, in particular, programs) that a user can store on it. However, it is a good idea to pay particular attention to its performances (in relation notably to its spindle speed), which can hamper the system's overall capacities if they are too weak.

Using external hard drives (FireWire or USB 2.0) can nevertheless enhance a laptop computer by wiping out the intrinsic limitations of its standard hard drives and extending its storage capacity ad infinitum.

More and more laptop computers are making a CD-ROM or a DVD-ROM drive or even a burner into standard features on high-level configurations. When the drive combines several of these functions, it is called a "combo".


It should be noted that some burners support both of these standards and thus are called "multi-format" burners.

Having IEEE 1394 ports (with the commercial name of FireWire on Apple machines and i.LINK on IBM compatible machines) is a good idea for those users acquiring video from a DV digital video camera. FireWire ports allow throughputs on the order of 800 Mbit/s!

Some laptops come standard with multi-card readers that can read flash memories in the following different formats: Secure digital (SD Card), Multimedia Card (MMC), Memory stick (MS), SmartMedia (SM), Compact Flash (CF) or xD picture card. This type of reader can be extremely practical for those people who have MP3 players, digital cameras or personal desktop assistants (PDAs) because it facilitates the direct copying of files (e.g. music or digital photos) at a high bandwidth.

Every laptop computer has a screen and internal speakers but in some circumstances it is useful or even necessary to connect it to higher performance stereo or video systems (e.g. for a presentation or for a DVD projection).

With regard to audio I/O, all laptop computers come with standard headphone and microphone jacks as well as stereo speakers of varying quality. Having a S/PDIF output (digital audio output) can allow users to connect their laptop to a sound system that supports Dolby Digital 5.1 (e.g. for Home Cinema use).

Laptop computers come standard with an integrated keyboard and pointing device. The pointing device is generally a touchpad, i.e. a flat touch-sensitive surface that allows you to move the cursor like a mouse. Some laptops come equipped with a trackpoint, i.e. a little touch-sensitive eraser-like tip (generally red) located in the middle of the keyboard that allows users to move the cursor with their fingers.

The keyboard and pointing device should be chosen according to their ergonomics. They should be tried out in order to determine if they are comfortable to use.

It should be noted that nothing prevents users from connecting a traditional mouse to a laptop computer for more comfort.

In the communications world that we live in today, it is impossible to imagine a laptop computer without network functionalities. The terms nomadism and mobility are used to refer to individuals' capacity to have access to their information over the Internet, no matter where they are.

The "10/100 Mbit Fast Ethernet" connector can be used to connect a laptop to a local area network (LAN) or to connect it to network equipment such as an ADSL modem, a router, a switch or even directly to another computer with a crossover network cable.

With the emergence of wireless networks and the increased number of public and private wireless network access points (called hot spots), the concept of nomadism is taking on a whole new meaning. Thus, some laptop computers now come standard with built-in or card WiFi adapters. WiFi technology allows computers equipped with specialized adapters (WiFi cards) to connect with each other over a range of several dozen or even hundreds of meters and possibly even to connect to the Internet thanks to a wireless router (WiFi terminal). There are several WiFi standards that use different transmission channels:

Some laptops are equipped with Bluetooth technology, which is another wireless network technology. However, it is used primarily for wireless personal area network (WPAN), i.e. it is intended for small wireless devices such as mobile phones, PDAs, etc.

IrDa (infrared) technology allows users to connect small devices wirelessly to each other but, unlike BlueTooth technology, has distance limitations (several dozen centimetres facing each other) and reduced throughput.

When you buy a laptop computers, in addition to choosing specific hardware elements you should carefully weigh the following characteristics:


Generally, computer autonomy is expressed in the amount of time that a computer can remain in sleep mode and in use.

Some laptops come with a docking station. This is the device that the laptop computer fits into in order to easily connect it with a keyboard, mouse, screen, etc.

Buying a laptop computer is a big investment. Therefore it is necessary to protect yourself against the risks associated with computer failure by signing up for a warranty. The warranty is even more important for laptop computers because it is not possible to change parts (graphics card, sound card, etc.) like you can on desktop computers. Most offers automatically include at least one year but it might be a good idea to take a several year warranty extension in order to cover the maximum number of risks.

Laptop computers are almost systematically equipped with an operating system when you purchase them but some offers also include a whole package of useful software such as office tools, an encyclopaedia or even antivirus software. It is a good idea to keep this in mind when you are buying a laptop.

If you are going to travel with your computer, it is necessary to have a computer bag in order to protect it when transporting it with all its accessories.

In addition, it is highly recommended that you invest in a security cable (Kensington ComboSaver), which allows you to attach the laptop to a fixed piece of furniture thanks to the standard notch that is found on almost all laptops on the market.

This document, titled « Laptop Computer », is available under the Creative Commons license. Any copy, reuse, or modification of the content should be sufficiently credited to CCM (ccm.net).