The PC Card bus was developed in 1989 by the PCMCIA (Personal Computer Memory Card International Association, which is the name sometimes given to the bus) consortium in order to extend current peripheral equipment connectivity on mobile computers.

PCMCIA peripheral equipment comes in the shape of a credit card (54mm by 85 mm) and has a 68-pin connector. 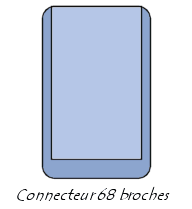 There are three form factors that correspond to three standard thicknesses:

Starting in 1995, the CardBus standard (sometimes called 32-bit PC Card) appeared, allowing 32-bit data transfer at a speed of 33 MHz with a 3V charge (versus 5.5 for PCMCIA).