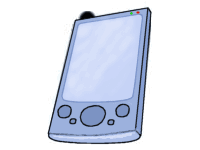 A PDA is a pocket computer originally designed as an organizer. A personal assistant generally supplies the following standard applications:

PDAâ€(TM)s are also used with increasing frequency for geo-referencing, mapping and road navigation by plugging them into a geo-reference device (GPS, Global Positioning System). In effect, it is possible to obtain a compatible, low cost and high performance GPS that helps with road navigation a using a map that continually displays the userâ€(TM)s location, speed and a visual representation of the road (eventually in 3D) with instructions both on-screen and from a synthesized voice.

PDAâ€(TM)s have operating systems adapted to their screen resolution and whose features correspond to the characteristics of the device.

These two systems have almost the same characteristics and the same functions, but with different methods of holding them and with incompatibilities between systems.

Note that there are Linux operating systems that were specifically developed for both types of machines.

When purchasing a PDA, it is important to pay attention to the following characteristics:

Related
This document, titled « PDA (Organizer) », is available under the Creative Commons license. Any copy, reuse, or modification of the content should be sufficiently credited to CCM (ccm.net).
Previous