The processor (CPU, for Central Processing Unit) is the computer's brain. It allows the processing of numeric data, meaning information entered in binary form, and the execution of instructions stored in memory.

The first microprocessor (Intel 4004) was invented in 1971. It was a 4-bit calculation device with a speed of 108 kHz. Since then, microprocessor power has grown exponentially. So what exactly are these little pieces of silicone that run our computers?

The processor (called CPU, for Central Processing Unit) is an electronic circuit that operates at the speed of an internal clock thanks to a quartz crystal that, when subjected to an electrical currant, send pulses, called "peaks". The clock speed (also called cycle), corresponds to the number of pulses per second, written in Hertz (Hz). Thus, a 200 MHz computer has a clock that sends 200,000,000 pulses per second. Clock frequency is generally a multiple of the system frequency (FSB, Front-Side Bus), meaning a multiple of the motherboard frequency.

With each clock peak, the processor performs an action that corresponds to an instruction or a part thereof. A measure called CPI (Cycles Per Instruction) gives a representation of the average number of clock cycles required for a microprocessor to execute an instruction. A microprocessorâ€(TM)s power can thus be characterized by the number of instructions per second that it is capable of processing. MIPS (millions of instructions per second) is the unit used and corresponds to the processor frequency divided by the CPI.

The number of bits in an instruction varies according to the type of data (between 1 and 4 8-bit bytes).

Instructions can be grouped by category, of which the main ones are:

When the processor executes instructions, data is temporarily stored in small, local memory locations of 8, 16, 32 or 64 bits called registers. Depending on the type of processor, the overall number of registers can vary from about ten to many hundreds.

The main registers are:

Cache memory (also called buffer memory) is local memory that reduces waiting times for information stored in the RAM (Random Access Memory). In effect, the computer's main memory is slower than that of the processor. There are, however, types of memory that are much faster, but which have a greatly increased cost. The solution is therefore to include this type of local memory close to the processor and to temporarily store the primary data to be processed in it. Recent model computers have many different levels of cache memory:


Level 1 caches can be accessed very rapidly. Access waiting time approaches that of internal processor registers.
All these levels of cache reduce the latency time of various memory types when processing or transferring information. While the processor works, the level one cache controller can interface with the level two controller to transfer information without impeding the processor. As well, the level two cache interfaces with the RAM (level three cache) to allow transfers without impeding normal processor operation.

Control signals are electronic signals that orchestrate the various processor units participating in the execution of an instruction. Control signals are sent using an element called a sequencer. For example, the Read / Write signal allows the memory to be told that the processor wants to read or write information.

The processor is made up of a group of interrelated units (or control units). Microprocessor architecture varies considerably from one design to another, but the main elements of a microprocessor are as follows:

The diagram below gives a simplified representation of the elements that make up the processor (the physical layout of the elements is different than their actual layout): 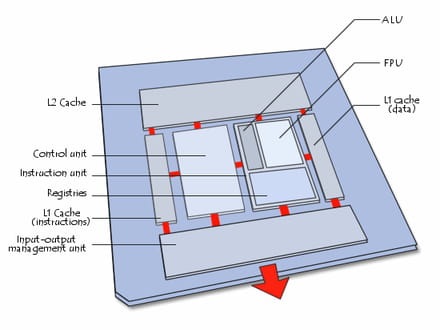 To process information, the microprocessor has a group of instructions, called the "instruction set", made possible by electronic circuits. More precisely, the instruction set is made with the help of semiconductors, little "circuit switches" that use the transistor effect, discovered in 1947 by John Barden, Walter H. Brattain and William Shockley who received a Nobel Prize in 1956 for it.

A MOS (metal, oxide, silicone) transistor is the most common type of transistor used to design integrated circuits. MOS transistors have two negatively charged areas, respectively called source (which has an almost zero charge) and drain (which has a 5V charge), separated by a positively charged region, called a substrate). The substrate has a control electrode overlaid, called a gate, that allows a charge to be applied to the substrate.

When there is no charge on the control electrode, the positively charged substrate acts as a barrier and prevents electron movement from the source to the drain. However, when a charge is applied to the gate, the positive charges of the substrate are repelled and a negatively charged communication channel is opened between the source and the drain.

Once combined, transistors can make logic circuits, that, when combined, form processors. The first integrated circuit dates back to 1958 and was built by Texas Instruments.

MOS transistors are therefore made of slices of silicone (called wafers) obtained after multiple processes. These slices of silicone are cut into rectangular elements to form a "circuit". Circuits are then placed in cases with input-output connectors and the sum of these parts makes an "integrated circuit". The minuteness of the engraving, written in microns (micrometers, written Âµm) defines the number of transistors per surface unit. There can be millions of transistors on one single processor.

Moore's Law, penned in 1965 by Gordon E. Moore, cofounder of Intel, predicted that processor performance (by extension of the number of transistors integrated in the silicone) would double every twelve months. This law was revised in 1975, bringing the number of months to 18. Mooreâ€(TM)s Law is still being proven today.

Because the rectangular case contains input-output pins that resemble legs, the term "electronic flea" is used in French to refer to integrated circuits.

The processor works efficiently thanks to a limited number of instructions, hardwired to the electronic circuits. Most operations can be performed using basic functions. Some architecture does, however, include advanced processor functions.

CISC is especially popular in 80x86 type processors. This type of architecture has an elevated cost because of advanced functions printed on the silicone.

Instructions are of variable length and may sometimes require more than one clock cycle. Because CISC-based processors can only process one instruction at a time, the processing time is a function of the size of the instruction.

Parallel processing consists of simultaneously executing instructions from the same program on different processors. This involves dividing a program into multiple processes handled in parallel in order to reduce execution time.

Pipelining is technology that improves instruction execution speed by putting the steps into parallel.

Instructions are organized into lines in the memory and are loaded one after the other.

Thanks to the pipeline, instruction processing requires no more than the five preceding steps. Because the order of the steps is invariable (FETCH, DECODE, EXECUTE, MEMORY, WRITE BACK), it is possible to create specialized circuits in the processor for each one.

The principle of a pipeline may be compared to a car assembly line. The car moves from one workstation to another by following the assembly line and is completely finished by the time it leaves the factory. To completely understand the principle, the assembly line must be looked at as a whole, and not vehicle by vehicle. Three hours are required to produce each vehicle, but one is produced every minute!

It must be noted that there are many different types of pipelines, varying from 2 to 40 steps, but the principle remains the same.

HyperThreading (written HT) technology consists of placing two logic processors with a physical processor. Thus, the system recognizes two physical processors and behaves like a multitasking system by sending two simultaneous threads, referred to as SMT (Simultaneous Multi Threading). This "deception" allows processor resources to be better employed by guaranteeing the bulk shipment of data to the processor.

This document, titled « Processor », is available under the Creative Commons license. Any copy, reuse, or modification of the content should be sufficiently credited to CCM (ccm.net).