There are generally two broad categories of random access memory:

The random access memory comprises hundreds of thousands of small capacitors that store loads. When loaded, the logical state of the capacitor is equal to 1, otherwise it is 0, meaning that each capacitor represents one memory bit.

Given that the capacitors become discharged they must be constantly recharged (the exact term is refresh) at regular intervals, known as the refresh cycle. DRAM memories for example require refresh cycles of around 15 nanoseconds (ns).

Each capacitor is coupled with a transistor (MOS-type) enabling "recovery" or amendment of the status of the capacitor. These transistors are arranged in the form of a table (matrix) thus we access a memory box (also called memory point) via a line and a column. 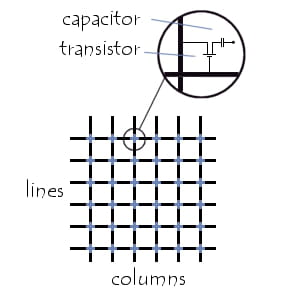 Each memory point is thus characterised by an address which corresponds to a row number and a column number. This access is not instant and the access time period is known as latency time. Consequently, time required for access to data in the memory is equal to cycle time plus latency time.

Thus, for a DRAM memory, access time is 60 nanoseconds (35ns cycle time and 25ns latency time). On a computer, the cycle time corresponds to the opposite of the clock frequency; for example, for a computer with frequency of 200 MHz, cycle time is 5 ns (1/200*106)).

There are many type of random access memory. They exist in the form of memory modules that can be plugged into the mother board.

Early memories existed in the form of chips called DIP (Dual Inline Package). Nowadays, memories generally exist in the form of modules, which are cards that can be plugged into connectors for this purpose. There are generally three types of RAM module:

It may be interesting to note that the DIMM connectors have been enhanced to make insertion easier, thanks to levers located either side of the connector.

Smaller modules also exist; they are known as SO DIMM (Small Outline DIMM), designed for portable computers. SO DIMM modules have only 144 pins for 64-bit memories and 77 pins for 32-bit memories.


Given their high transfer speed, RIMM modules have a thermal film which is supposed to improve heat transfer.

As for DIMMs, smaller modules also exist; they are known as SO RIMM (Small Outline RIMM), designed for portable computers. SO RIMM modules have only 160 pins.

Furthermore, access to memory generally concerns data stored consecutively in the memory. Thus burst mode allows access to the three pieces of data following the first piece with no additional latency time. In this burst mode, time required to access the first piece of data is equal to cycle time plus latency time, and the time required to access the other three pieces of data is equal to just the cycle time; the four access times are thus written in the form X-Y-Y-Y, for example 5-3-3-3 indicates a memory for which 5 clock cycles are needed to access the first piece of data and 3 for the subsequent ones.

To speed up access to the DRAM, there is a technique, known as paging, which involves accessing data located in the same column by changing only the address of the row, thus avoiding repetition of the column number between reading of each row. This is known as DRAM FPM (Fast Page Mode). FPM achieves access times of around 70 to 80 nanoseconds for operating frequency between 25 and 33 Mhz.

DRAM EDO (Extended Data Out, sometimes also called hyper-page") was introduced in 1995. The technique used with this type of memory involves addressing the next column while reading the data in a column. This creates an overlap of access thus saving time on each cycle. EDO memory access time is thus around 50 to 60 nanoseconds for operating frequency between 33 and 66 Mhz.

Thus the RAM EDO, when used in burst mode, achieves 5-2-2-2 cycles, representing a gain of 4 cycles on access to 4 pieces of data. Since the EDO memory did not work with frequencies higher than 66 Mhz, it was abandoned in favor of the SDRAM.

The SDRAM (Synchronous DRAM), introduced in 1997, allows synchronized reading of data with the mother-board bus, unlike the EDO and FPM memories (known as asynchronous) which have their own clock. The SDRAM thus eliminates waiting times due to synchronization with the mother-board. This achieves a 5-1-1-1 burst mode cycle, with a gain of 3 cycles in comparison with the RAM EDO. The SDRAM is thus able to operate with frequency up to 150 Mhz, allowing it to achieve access times of around 10 ns.

The DR-SDRAM (Direct Rambus DRAM) is a type of memory that lets you transfer data to a 16-bit bus at frequency of 800Mhz, giving it a bandwidth of 1.6 GB/s. As with the SDRAM, this type of memory is synchronized with the bus clock to enhance data exchange. However, the RAMBUS memory is a proprietary technology, meaning that any company wishing to produce RAM modules using this technology must pay royalties to both RAMBUS and Intel.

The DDR-SDRAM (Double Data Rate SDRAM) is a memory, based on the SDRAM technology, which doubles the transfer rate of the SDRAM using the same frequency.

Data are read or written into memory based on a clock. Standard DRAM memories use a method known as SDR (Single Data Rate) involving reading or writing a piece of data at each leading edge.

The DDR doubles the frequency of reading/writing, with a clock at the same frequency, by sending data to each leading edge and to each trailing edge.

DDR memories generally have a product name such as PCXXXX where "XXXX" represents the speed in Mo/s.

DDR2 (or DDR-II) memory achieves speeds that are twice as high as those of the DDR with the same external frequency.

QDR (Quadruple Data Rate or quad-pumped) designates the reading and writing method used. DDR2 memory in fact uses two separate channels for reading and writing, so that it is able to send or receive twice as much data as the DDR.

DDR2 also has more connectors than the classic DDR (240 for DDR2 compared with 184 for DDR).

The table below gives the equivalence between the mother-board frequency (FSB), the memory (RAM) frequency and its speed:

It is not unusual to see scores such as 3-2-2-2 or 2-3-3-2 to describe the parameterization of the random access memory. This succession of four figures describes the synchronization of the memory (timing), i.e. the succession of clock cycles needed to access a piece of data stored in the RAM. These four figures generally correspond, in order, to the following values:

The memory cards are equipped with a device called SPD (Serial Presence Detect), allowing the BIOS to find out the nominal setting values defined by the manufacturer. It is an EEPROM whose data will be loaded by the BIOS if the user chooses "auto" setting.

Thus the modules with parity bit allow the integrity of data to be checked but do not provide for error correction. Moreover, for 9 Mo of memory, only 8 will be used to store data since the last mega octet is used to store the parity bits.

ECC (Error Correction Coding) memory modules are memories with several bits dedicated to error correction (they are known as control bits). These modules, used mainly in servers, allow detection and correction of errors.

Some memory controllers offer a dual channel for the memory. The memory modules are used in pairs to achieve higher bandwidth and thus make the best use of the system's capacity. When using the Dual Channel, it is vital to use identical modules in a pair (same frequency and capacity and preferably the same brand).

This document, titled « Random access memory (RAM or PC memory) », is available under the Creative Commons license. Any copy, reuse, or modification of the content should be sufficiently credited to CCM (ccm.net).