DTS, Inc. (originally Digital Theater System) is a digital sound coding standard created by Universal Pictures. Compared with the Dolby Digital standard, DTS uses four times less compression and digitizes sound at 20 bits instead of 16. Therefore, DTS's sound quality is theoretically higher, at the cost of a higher bit rate. To be able to play DTS-encoded media, you need a certified DTS decoder. 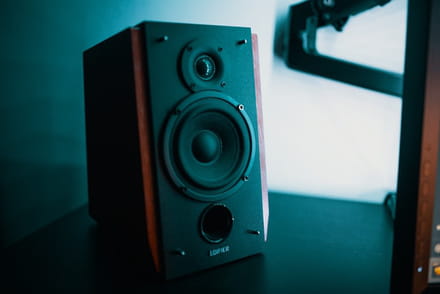 The first is DTS 6, the most commonly used 5.1 standard.It can encode six-channel sound with less compression than the Dolby Digital standard. The first five channels are used for the satellite speakers, while the last is reserved for the subwoofer. These devices are normally identified by the presence of this logo:

The third category is DTS 24/96. It represents an audio format used for storing high-definition music with several channels. This format is primarily used in DVD Audio or audio tracks that accompany video DVDs. The name comes from the fact that the tracks are recorded in 24 bits at 96 kHz. It can be in either stereo or 5.1.

The last category is DTS Neo:6, a format for upmixing (or virtualizing) from a stereo sound source.

Related
This document, titled « DTS », is available under the Creative Commons license. Any copy, reuse, or modification of the content should be sufficiently credited to CCM (ccm.net).
Previous