The term "multichannel audio" refers to the use of multiple audio tracks to reconstruct sound on a multi-speaker sound system.

Two digits separated by a decimal point (2.1, 5.1, 6.1, 7.1, etc.) are used to classify the various kinds of speaker set-ups, depending on how many audio tracks are used.

For any given number of audio channels, there is an optimal physical setup for the speakers that produces the best effect possible. For this reason, special icons are placed on surround sound equipment to symbolise the number of channels and the physical placement of the speakers. Small black squares (one for each channel) are placed in a square that represents a room to indicate how to set them up:

The physical configuration of the speakers in a 5.1 surround system is of utmost importance, as it directly influences sound quality and the realizm of audio effects.

For best results, there are a number of rules to follow when placing each speaker: 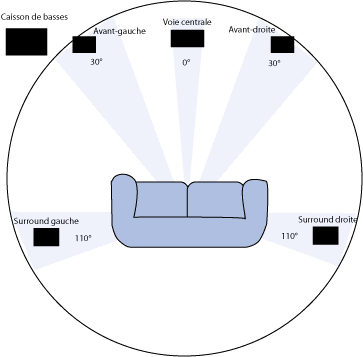 6.1 setup is similar to a 5.1 configuration, as it only adds a rear central speaker in order to compensate for the gap between the two rear speakers. 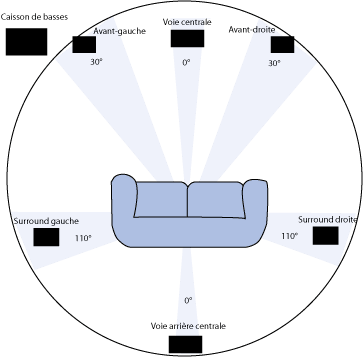 A 7.1 setup bridges the gap between the two rear speakers, using not one, but two speakers. 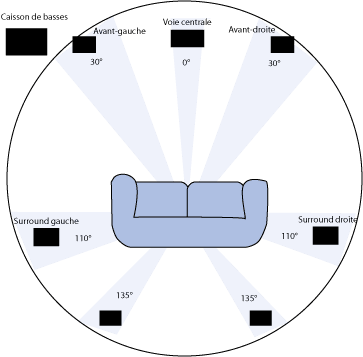 Related
This document, titled « Multichannel audio (5.1, 6.1, 7.1) », is available under the Creative Commons license. Any copy, reuse, or modification of the content should be sufficiently credited to CCM (ccm.net).
Previous