To make it more versatile, Microsoft Windows is structured around services (processes) which run in the background. The list of processes currently running may be viewed by pressing CTRL+ALT+DEL simultaneously, then clicking on the Processes tab. The window then displays the list of processes being run and the system resources allocated to each one.

Many of these processes are system processes which are an integral part of Windows, while some are third-party applications. When the operating system seems to "hang," it may be helpful to determine which process is consuming the most resources.

What's more, the presence of worms, viruses, Trojan horses, spyware, and adware on the system is usually indicate by the presence of suspicious processes. This is why they often take the name of a true system process in order to go unnoticed (for example, system32.exe instead of system32.dll, or isass.exe instead of lsass.exe).

The goal of this folder is to help you recognise system processes, application processes, and several false processes.

The Task Manager is a tool that supervises system performance and monitors the status of Windows processes in real time. You may view the Task Manager by pressing the keys CTRL+ALT+DEL simultaneously, or by right-clicking on the taskbar and selecting "Task Manager", or by running it from Start Menu / Run with the command taskmgr.exe. 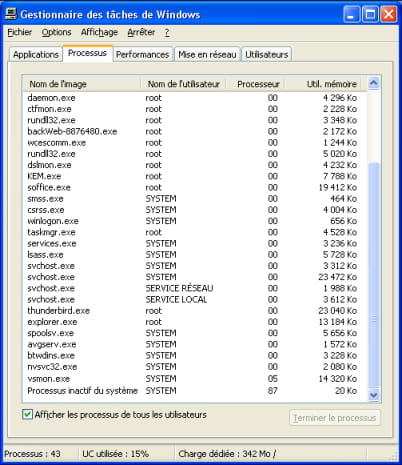 The Task Manager has 5 tabs:

Below is a non-exhaustive list of common processes, grouped by category (the third column indicates the name of processes which may constitute a security risk).

Related
This document, titled « Windows Processes - Introduction », is available under the Creative Commons license. Any copy, reuse, or modification of the content should be sufficiently credited to CCM (ccm.net).
Previous