A "SAN" (Storage Area Network) is a complete storage network. A SAN is a complete architecture that groups together the following elements: 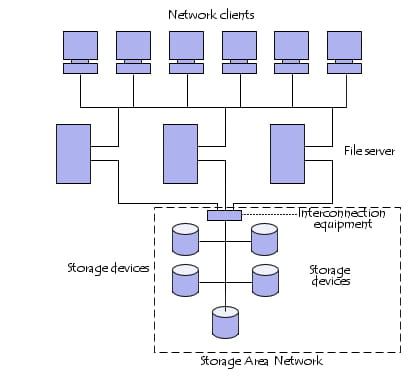 Presentation of a SAN

The SAN's performance is directly linked to that of the type of network being used. In the case of a fibre channel network, the bandwidth is approximately 100 megabytes/second (1,000 megabits/second) and can be extended by increasing the number of access connections.

A SAN's capacity can be extended almost limitlessly and can reach hundreds and even thousands of terabytes.

Using a SAN, it is possible to share data between several network computers without sacrificing performance because SAN traffic is completely separate from user traffic. These are application servers that act as an interface between the data network (usually fibre channel) and the user network (usually Ethernet).

On the other hand, it is much more costly to acquire a SAN than a NAS because it is a complete architecture that uses technology that is still very expensive. Often when a company figures out the TCO in terms of cost per byte, the cost can be more easily justified.

This document, titled « SAN (Storage Area Network) », is available under the Creative Commons license. Any copy, reuse, or modification of the content should be sufficiently credited to CCM (ccm.net).