Introduction to the GSM standard

The GSM (Global System for Mobile communications) network is, at the start of the 21st century, the most commonly used mobile telephony standard in Europe. It is a so-called "second generation" (2G) standard because, unlike the first generation of portable telephones, communications occur in an entirely digital mode.

Called "Groupe Spécial Mobile" when first standardized in 1982, it became an international standard called "Global System for Mobile communications" in 1991.

The concept of cellular network

Mobile telephone networks are based on the concept of cells, circular zones that overlap to cover a geographical area.

Cellular networks are based on the use of a central transmitter-receiver in each cell, called a "base station" (or Base Transceiver Station, written BTS).

The smaller the radius of a cell, the higher the available bandwidth. So, in highly populated urban areas, there are cells with a radius of a few hundred metres, while huge cells of up to thirty kilometres provide coverage in rural areas.

In a cellular network, each cell is surrounded by 6 neighboring cells (which is why a cell is generally drawn as a hexagon). To avoid interference, adjacent cells cannot use the same frequency. In practice, two cells using the same frequency range must be separated by a distance of two to three times the diameter of the cell.

Architecture of the GSM network

In a GSM network, the user terminal is called a mobile station. A mobile station is made up of a SIM (Subscriber Identity Module) card allowing the user to be uniquely identified, and a mobile terminal, in other words the user device (normally a portable telephone).

The SIM card therefore allows each user to be identified independently of the terminal used during communication with a base station. Communications between a mobile station and a base station occur via a radio link, generally called an air interface (or more rarely Um interface). 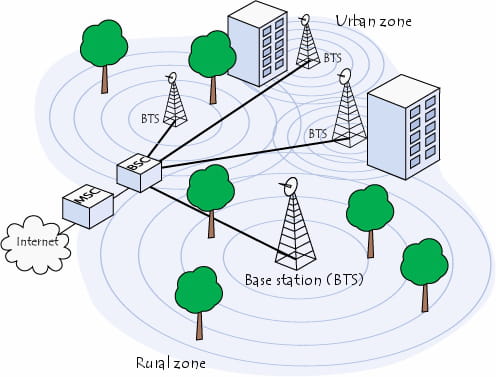 Finally, the base station controllers are themselves physically connected to the Mobile Switching Centre (MSC), managed by the telephone network operator, which connects them to the public telephone network and the Internet. The MSC belongs to a Network Station Subsystem (NSS), which is responsible for managing user identities, their location and establishment of communications with other subscribers.

The MSC is generally connected to databases that provide additional functions:

The cellular network formed in this way is designed to support mobility via management of handovers (movements from one cell to another).

Finally, GSM networks support the concept of roaming: movement from one operator network to another.

This document, titled « The GSM standard », is available under the Creative Commons license. Any copy, reuse, or modification of the content should be sufficiently credited to CCM (ccm.net).