What is WiMAX ? WiMAX stands for Worldwide Interoperability for Microwave Access. It is a metropolitan wireless standard created by the companies Intel and Alvarion in 2002 and ratified by the IEEE (Institute of Electrical and Electronics Engineers) under the name IEEE-802.16. More precisely, WiMAX is the commercial designation that the WiMAX Forum gives to devices which conform to the IEEE 802.16 standard, in order to ensure a high level of interoperability among them. Devices certified by the WiMAX Forum can carry the following logo:

The goal of WiMAX is to provide high-speed Internet access in a coverage range several kilometres in radius. In theory, WiMAX’s speed is around 70 Mbps with a range of 50 kilometres. The WiMAX standard has the advantage of allowing wireless connections between a base transceiver station (BTS) and thousands of subscribers without requiring that they be in a direct line of sight (LOS) with that station. This technology is called NLOS for non-line-of-sight. In reality, WiMAX can only bypass small obstructions like trees or a house and cannot cross hills or large buildings. When obstructions are present, actual throughput might be under 20 Mbps.

A Wireless Metropolitan Area Network (WMAN) is also known as a Wireless Local Loop (WLL). WMANs are based on the IEEE 802.16 standard. Wireless local loop can reach effective transfer speeds of 1 to 10 Mbps within a range of 4 to 10 kilometres, which makes it useful mainly for telecommunications companies. The best-known wireless metropolitan area network is WiMAX, that can reach a speed on the order of 70 Mbps over a radius of several kilometres.

At the heart of WiMAX technology is the BTS, a central antenna that communicates with subscribers' antennas. The term point-multipoint link is used for WiMAX's method of communication.

The revisions of the IEEE 802.16 standard fall into two categories:

One of WiMAX's potential uses is to cover the so-called last mile"(or "last kilometer”) area, meaning providing high-speed Internet access to areas that normal wired technologies do not cover (such as DSL, cable, or dedicated T1 lines).

Another possibility involves using WiMAX as a backhaul between two local wireless networks, such as those using the WiFi standard. WiMAX will ultimately enable two different hotspots to be linked to create a mesh network. 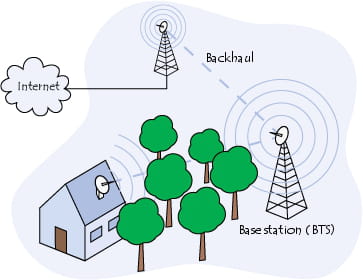 WiMAX and Quality of Service

The WiMAX standard supports Quality of Service (often called QoS for short), the ability to ensure that a service works when used. In practice, WiMAX lets bandwidth be reserved for a given purpose. Some applications cannot work properly when bottlenecks occur. This is the case for Voice Over IP (VOIP), as spoken communication is ineffective when gaps a second long are introduced.

Related
This document, titled « WiMAX - 802.16 - Worldwide Interoperability for Microwave Access », is available under the Creative Commons license. Any copy, reuse, or modification of the content should be sufficiently credited to CCM (ccm.net).