A wireless network, as its name suggests, is a network in which two or more terminals (such as laptop computers, PDAs, etc.) can communicate without a hard-wired link.

With wireless networking, a user can stay connected even when moving around within a given geographic area, and this is why the word "mobility" is sometimes used when discussing them.

Wireless networks are based on a link using electromagnetic radiation (radio and infrared) instead of normal cables. There are several different technologies, which differ by the broadcast frequency they use and the range and speed of their transmissions.

Wireless networks are used to make linking remote devices easier over distances from a dozen metres to a few kilometres away. In addition, installing such networks doesn't require any major changes to existing infrastructure, as wired networks do; there's no need to drill holes in walls to drag cables through, and no need for wireways or connectors. This has caused the technology to attain widespread use.

On the other hand, there are some issues regarding the regulation of the radio spectrum. Radio waves are transmitted by many devices (including those used by the military, scientists, and amateurs), but are prone to interference. This is why regulation is needed in every country in order to define which frequency ranges and powers are allowed for each category of use.

In addition, Hertzian waves are not easily confined to a restricted geographic surface. It is therefore easy for a hacker to listen to a network if data is being transmitted unencrypted (as it is by default). Thus, measures must be taken to ensure the privacy of data traveling over wireless networks.

Normally, wireless networks are classified into one of several categories, depending on the geographic area within which a user may connect to the network (called the coverage area): 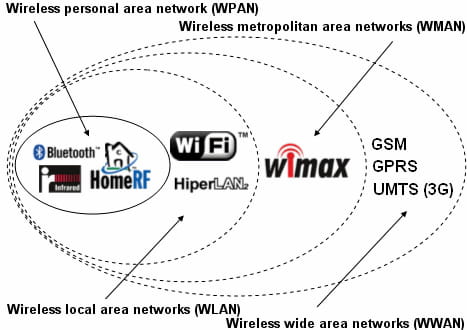 Related
This document, titled « Wireless Networks », is available under the Creative Commons license. Any copy, reuse, or modification of the content should be sufficiently credited to CCM (ccm.net).
Previous