The RSS standard represents a simple way of getting informed about new content on a website without having to visit it.

The "RSS" format (which stands for "Really Simple Syndication") is used to encode a website's content into an XML file, so that third parties can use that content. The RSS file, also called an RSS feed or RSS channel, containing information to be distributed, is kept up-to-date so that it always contains the latest published information.

An RSS feed is basically a file containing a title, a short description and a link to a page that describes the information in greater detail. Websites use them to inform a wider audience about their latest updates, while receiving many visitors thanks to the hyperlink inviting users to read the rest of the updates online.

Sites that offer one or more newsfeeds in RSS format sometimes display one of these logos:

There are typically two ways of using RSS: 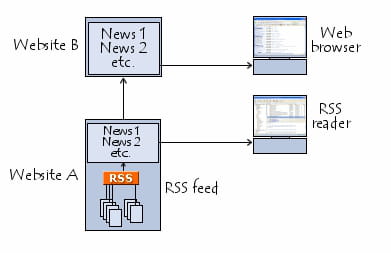 To offer an RSS feed on one's site and thereby let some of one's content be available to other webmasters, all that is needed is to create a script which will gather information to be included in the RSS feed and write it into the XML file in RSS format.

Using RSS feeds on another site

Any webmaster with the required tools can use another website's RSS feed in order to automatically display on his or her own site the information it contains. What's more, depending on how much of the information is in XML format, it is possible to customize the way the data is displayed, and to aggregate multiple RSS feeds within the same page. This is called "content syndication."

In order to use an RSS feed offered by a site, you need to have a tool that can analyze XML (an XML parser) to convert it into XML. There are many tools in most computer languages which let RSS channels be used easily. The MagPie RSS tool, for example, can parse RSS feeds, no matter which version of the standard is being used, with a basic script in PHP language.

Related
This document, titled « RSS - Content Syndication », is available under the Creative Commons license. Any copy, reuse, or modification of the content should be sufficiently credited to CCM (ccm.net).
Next