If you have two or more computers equipped with wireless adapters (WiFi cards), it is possible to easily connect them in a network by setting up a so-called "ad hoc" network, that is, a computer-to-computer network, without using an access point.

If one of the computers on the ad hoc network has an internet connection, it is possible to share it with the other computers on the network, like in the case of a traditional local network.

Before doing anything else, you need to equip all the machines that will be on the future ad hoc network with a wireless adapter and install drivers.

A new icon appears in the taskbar, indicating the presence of an active wireless adapter in the computer: 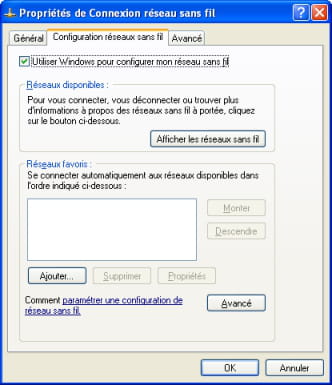 In the rest of this article, all manipulations will be made using the Windows XP utility (Service pack 2).

To create an ad hoc network, you need to add a new network, identified by a unique name, the SSID. To do so, click the button Add. A new dialogue box opens: 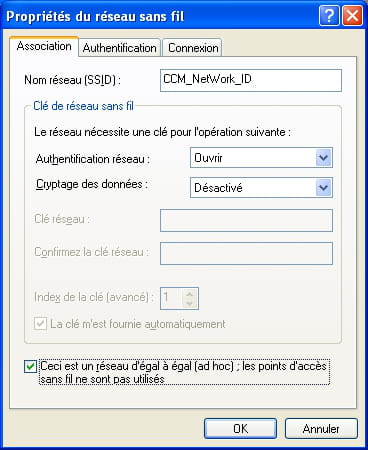 To create the ad hoc network, on each of the future network's computers, you simply need to enter the same SSID and check the box "This is a computer-to-computer network". The other options are used to heighten security. Firstly, leave the network completely open (with the options in the above screenshot), so as not to multiply settings that could prevent the first networking.

At this point, the machines on the ad hoc network should be able to connect to each other.

If the icon on the taskbar shows a small cross, it means that the computer is not connected to the wireless network; you should check the following points:

The previous steps let you connect the various machines. However, to be able to fully use the network, you need to define an IP addressing for the network's machines and set up a certain number of services (web server, shared files, internet connection sharing, etc.).

To configure the machine, simply right-click the icon corresponding to the wireless network connection, then choose "properties": 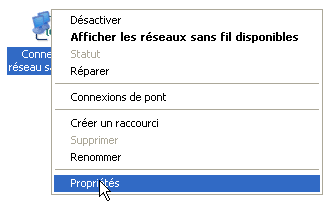 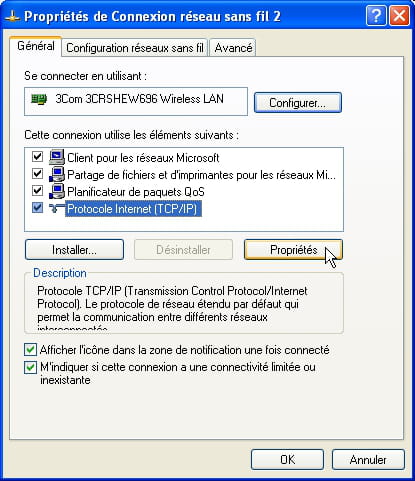 Enter each machine's IP address, making sure not to enter the same IP address twice, 255.255.255.0 as subnet mask and possibly the IP address of the machine sharing the internet access (default gateway, with the address 192.168.0.1 by convention). 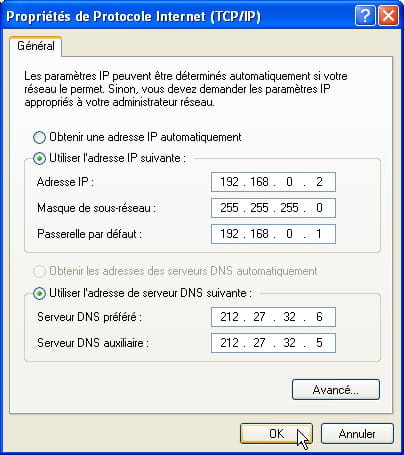 In the fields concerning the DNS, enter the IP addresses of the name servers corresponding to the connected machine's service provider. To find them out, you can just enter the following command for example (Start/Run) on the machine that's connected to the internet:

All that's left is to test the connection between the machines on the ad hoc network.

This document, titled « Creating an ad hoc WiFi network », is available under the Creative Commons license. Any copy, reuse, or modification of the content should be sufficiently credited to CCM (ccm.net).