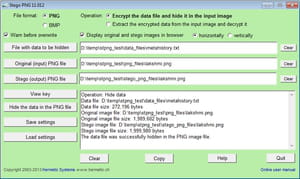 Hiding files: Stego PNG suggests hiding sensitive documents in image files in order not to raise suspicion from other users about their real contents. It transforms the original file appearance and extension so as it behaves as a PNG or a BMP file.

Encryption: for stronger protection of data, Stego PNG applies encryption algorithm to them before hiding them in image. The user can apply a custom encryption key to the file so as he ensures to be the only person who can decrypt it.

Extraction: for that option, the user has to import the hidden document image in PNG or BMP file to the main interface and launches the process.

Stego PNG is able to deal with all kind of files in MS Office formats such as Word documents and Excel spreadsheets.

It offers a simple and user-friendly interface that makes its handling easy.

This trial version is only valid for 21 days of use.

Alternative spelling: stpng_setup-11.01.zip, stpng_setup.zip
Latest update on February 18, 2015 at 06:55 AM.
Efficient and reliable to protect your data from prying eyes.