Big Math Attack!
Download
Download Freeware (1.1 MB)
Windows XP Windows 2000 - English
Learning mathematics is a big challenge for most people and its learning must begin at a very young age. Big Math Attack! is a program which helps children with that while having fun. 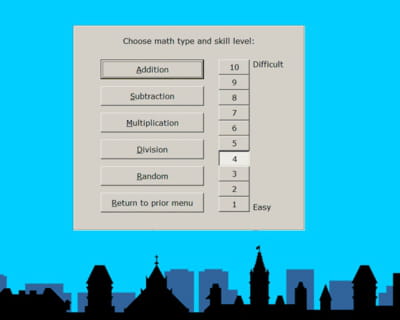 Program's flow: Big Math Attack! consists of protecting a city from falling meteorites. These lasts appear as a math problems and the user must solve them in a matter of time in order to avoid the explosion.


Graphics: This utilitarian was designed with colorful pictures for attracting children's eyes as well as helping them to distinguish the features such as the city in black, the background in blue and the options in white.

Scores: Big Math Attack! has also a function where children's scores can be recorded. This was done to allow them keep track of their progression. When the scores are higher, the meteorites fall faster and the child must solve it quickly.

Not only was it made for kids but for adults too.
Spelling and typing skills can also be acquired with Big Math Attack!.

This is a shareware version of Big Math Attack!
Share

Alternative spelling: bigmath_3.0.exe
Latest update on June 14, 2015 at 01:49 PM.
A great program that keeps the children amused for hours.