VirtualDubMod is an Open Source that is mainly based on VirtualDub. This tool enables to capture and edit video files on a sleek interface. 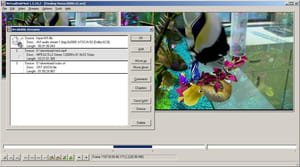