Micro Video Capture is an application that allows its user to capture videos and images using recording devices. It has also an editing function to customize the video. 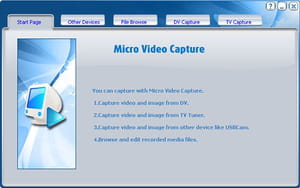 Saving: after recording the file, the software use a compression codec to save them in AVI for video and BMP for image. It also has a previewing window that allows the user to check the quality of image.

Editing: the advantage with Micro Video Capture is the fact that it gives the user the ability to make some modifications to his project. For instance, we can cite, among others, adding comments, texts or watermarks.

It offers an intuitive and user-friendly interface that makes its handling easy.

Micro Video Capture has a function for sending emails directly from its interface.
It supports full screen preview.

This is a trial version with limited functionalities.