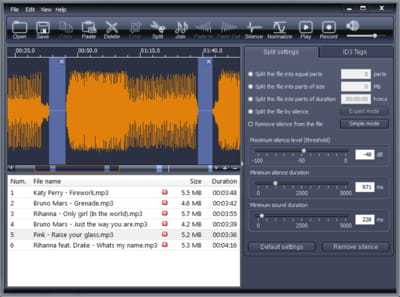 Split files: this function is used to divide a large MP3 file into other smaller ones. The user just needs to determine the beginning and the end of the section he wants to extract.


Merge: X-Wave MP3 Cutter Joiner also allows the user to combine multiple MP3s to one file. All the user has to do is to specify the elements he wants to merge and determine their combination order.

Editing: this program is endowed with several built-in editing tools. For example, some sequences of the MP3 file can be duplicated. The insertion of silence and fade in or fade out effects are also permitted.

Recording: with this function the user can capture sound using different devices such as a microphone. This process can be fully automated, facilitating the recording operation. For that case, the software starts the capture only when it detects a sound.

X-Wave MP3 Cutter Joiner does not require re-encoding any longer.