Having Chick Video Studio installed on your hard drives makes you free from downloading other video programs. It provides features of several applications that have been brought together in this software. 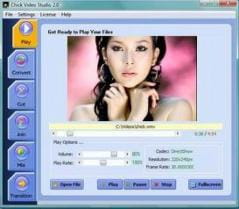