3D Image Commander is an image editing that allows creating 3D rendering. It provides various functions and effects related to that. 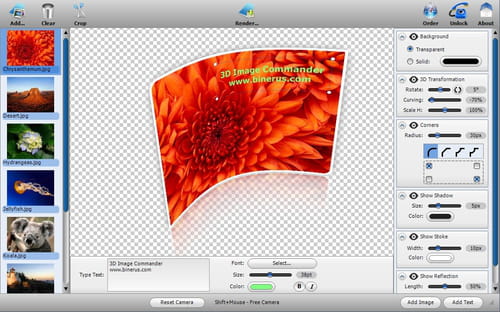 Editing: 3D Image Commander contains various tools to manipulate the image such as cropping, blur and coloring. It is also possible to define, among others, the angles of inclination and curvature of the photo.

3D Effects: this software is mainly created to apply 3D effects to photos. In order to do this, the user only has to import the image and start treating it. It offers several styles like rotating, transparency and shadow effects.

Batch Mode: 3D Image Commander also provides the ability to apply the propriety of an effect to one or multiple images at the same time. Such action can be performed without reducing the computer's performance.

Watermark: With 3D Image Commander, the user can insert in the canvas his own logo or text. Its transparency can adjust according to the need. This action aims to prevent unauthorized use of the images.