Winpooch is a Windows' watch-dog , free and open source. Anti spyware and anti trojan, it protects your computer by watching the real-time programs activity. Associated with the antivirus ClamWin, Winpooch protects you from viruses.

Winpooch uses the API hooking technique. It spies the programs when they are running and allows the user to control their activity. So, you so can forbid a program to write in system files or registry, or else to connect to internet. That makes Winpooch different from the other anti spywares. Most of them analyze the hard disk files in order to look for known signatures.

ClamWin is an open source antivirus for Windows which is not capable of analyzing the files in real-time. Thanks to Winpooch, it is now possible to scan the programs before their launch.

WinPooch aimed at developing a program capable of detecting virus installation such as spywares or trojans. The first versions of Winpooch (before the version 0.5) contented with notifying the user without allowing him/her to intervene. Its role was too passive, it has evolved to offer a real protection. 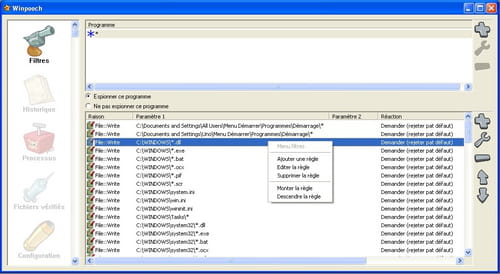