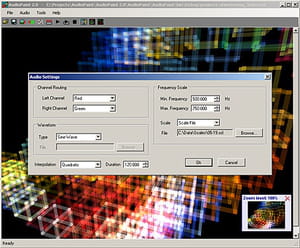 Conversion: this option is about converting an image file into a soundtrack. It changes pictures lines into sounds according to their height. Also, it also converts the color and the position of each pixel to the frequency.


Backup: once images are converted, AudioPaint stores the final files in the hard drive. The user only has to define the folder where he wants to save it. The output format proposed by this software is WAV.

Settings: to enhance the output quality, the user can adjust the channel, the waveform and the frequency of the sound. It is also possible to add fades and effects at the beginning and end of the song right with the "Audio Settings" tab.

AudioPaint can be used and downloaded for free.
It works with most popular image formats such as JPEG, GIF and BMP.
It can create thousands oscillators at the same time depending on the picture.

It only supports WAVE format as the output.

Alternative spelling: audiopaint30.zip
Latest update on January 30, 2015 at 09:18 AM.
A massive additive synthesizer.