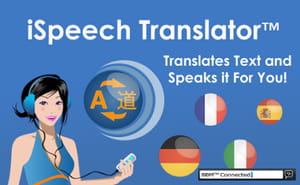 First, the user will have to speak or type the text to translate on the main interface. After that, the target language has to be selected. iSpeech Translator for BlackBerry will then, display the translation whether in text or in speech.

iSpeech Translator for BlackBerry can work with more than 25 languages on its database. It can be spoken or written translation, the application can provide solution to them. Among them, we can cite English, German and Korean.

There is an option allowing users to cut and paste a word or a phrase from a social network. It can also be texts from an email or Chat applications installed on the BlackBerry. iSpeech Translator for BlackBerry can provide instant translation to them.