Download Facebook Messenger for iPhone (EN)
Facebook Messenger is another version of Facebook that is especially optimized for instant messaging. This application has a unique aim that is to let users profit at most from IM option and other features such as vocal messages and others. These functions are detailed below. The user interface is similar to Facebook's. 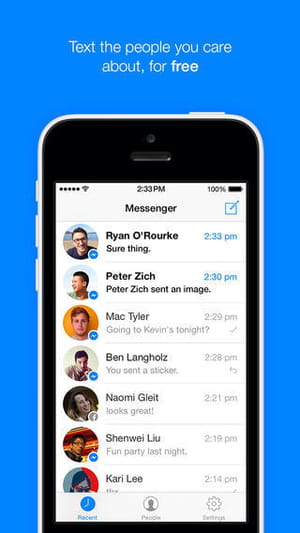 Since Facebook Messenger is mostly developed to chat with friends on Facebook, several options are made available at users' disposal. Among others, FB account owners are given the possibility to add stickers and tons of emoticons to liven up a conversation on this social network. This feature differentiates this release from others. Via this application for iPhone Operating System, Facebook Messenger also enables its users to exchange voice messages between them (send and receive). Indeed, this app can record a voice (a song or a few uttered sentences) and the output can be directly sent to another contact on Facebook Social Network. Apart from an enhanced IM conversation, this application also allows its user to access to their FB accounts. At any time, they can view and edit their profiles, publish articles or comment on a post. Real-time notifications (about a comment on a post, friend requests, and others) and liking are also showed up instantly on the interface.