The third edition of the GTA series, this version is loaded with new graphics and story.

Grand Theft Auto: San Andreas, released in 2004, is an action-adventure game that is a sequel to GTA: Vice City. This is the third 3D game in the series. The story of the game begins 5 years ago when Carl Johnson just managed to escape from the pressure of gangs, drugs, and corruption in Los Santos and San Andreas. He decides to go home after his brother informs him about the murder of their mother. Carl's mission is to save his remaining family members and take control of the streets. This is our San Andreas GTA download page. 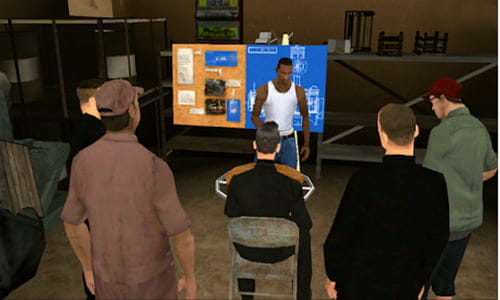 The mobile version of Grand Theft Auto: San Andreas can be acquired for $6.99.

There is a large amount of Grand Theft Auto: San Andreas cheat codes that you can choose from. These will typically give you access to faster cars, better weapons, and even make you invincible. If you are an Android user you can download the All GTA Cheats app, to have easy access to the different cheat codes available for this game. A similar application for the iOS platform is Cheats for GTA.