Multiplayer for Minecraft PE
Download
Download Commercial
iPhone - English
Multiplayer for Minecraft PE is the application that lets users play Minecraft Pocket Edition with several players. With the iPod, iPhone and iPad, gamers can host their own Pocket Edition servers without the need of a desktop computer, recurring charges and In-App purchases. This application designed for iOS users is developed by Innovative Devs. 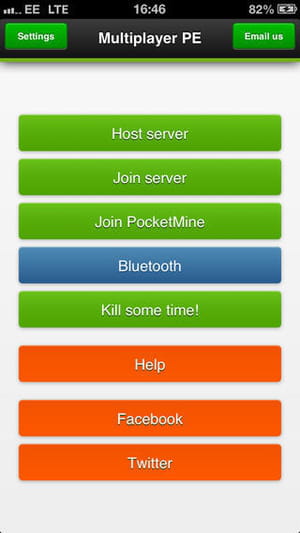 Multiplayer for Minecraft PE players first have to join the game (via the icon). Therein, they can meet other online gamers. An Internet connection is necessary to start a session that can be whether via Wi-Fi, 3G, 4G or LTE. IP addresses are appearing on the screen when entering the session.Voice chat option can be of a great help to exchange tips and advices while on Minecraft. Multiplayer for Minecraft PE players can talk directly with other players on the game session with the same Internet connection. Playing a session without Internet connected is feasible. Indeed, Multiplayer for Minecraft PE grants offline players the ability to play with another one using Bluetooth. The other user has to switch on the devices' Bluetooth to activate the process. Gamers are free to create and host their own servers on the app and invite other people. On the other hand, it's also possible to create and host a private server to request only players they want to join the game.

Multiplayer for Minecraft PE is lightweight. It is optimized for iPhone 5S and iOS 7.