Dumb Ways to Die
Download
Download Freeware
iPhone - English
Dumb Ways to Die is a black comedy game released in May 2013 for iPhone, iPod touch and iPad devices. It is developed and published by Metro Trains Melbourne Pty Ltd. Gamers have to avoid dangerous activities that may lead the figure to death. This game can be used on iPhone and iPad. 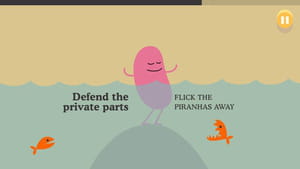