Pixel Gun 3D - Block World Pocket Survival Shooter with Skins Maker for minecraft (PC edition) & Multiplayer
Download
Download Commercial
iPhone - English
Pixel Gun 3D is a multiplayer deathmatch game where the player has to face and fight other users. Several game modes are made at players' disposal as well as all weapons and other tools to let them win the battle. Coins and scores can be shared on some social network websites. This iPhone game is developed by Alex Krasnov. 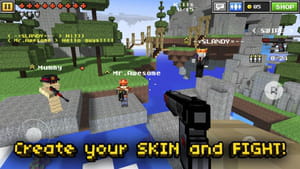