Bloons TD 5 is the fifth series of this Tower Game. It is developed and published by Ninja Kiwi which has first been released in December 2012. This version is especially destined for Android mobile phones and tablets. Enemies are Bloons; the player has to command monkeys to shoot them. Scores increase as Bloons are blown up into pieces. 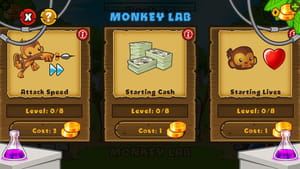