This is a great and easy way of earning some extra money for buying the occasional app or having some money on your account to rent movies or music. The app works well, you just need to leave the house in order to receive surveys!

Google Opinion Rewards is an app developed by Google Surveys team that enables you to earn Play Store credit (which you can use for other paying applications) simply by answering surveys. 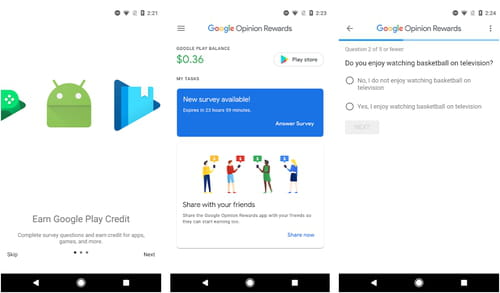 How The App Works

After downloading the app, you will be required to answer some basic questions about yourself so that Google can cater the surveys they send you to your tastes, habits and interests. From that point on, you’ll usually receive one weekly survey, although the frequency may vary from time to time. When you’ve received a survey to answer, you’ll get a notification on your mobile. After completing it, Google will credit either you Play Store account or a PayPal account with approximately $1 per survey. 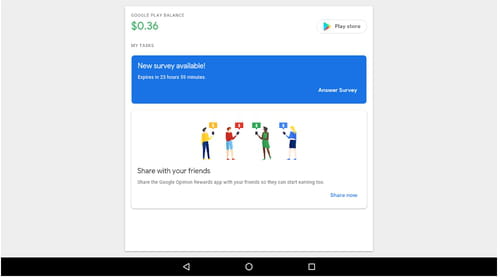 The number of surveys you receive depends on both your location and the shops and establishments you go to so it’s a good idea to have your GPS activated. The questions included in the surveys are usually commercial or about your habits and tastes and the surveys take on average 20 seconds to complete.

Google Opinion Rewards can be downloaded for iOS here.