One Punch Man: Road to Hero 2.0 for Android

One Punch Man: Road to Hero 2.0 a turn based strategy RPG game. The game is based on the famous webcomic, featuring the epic character Saitama. Although they are not a playable character here, as it would disturb the gameplay and unbalance the combat. But, don't be sad, all the other characters will be in the scene. This version is the continuation of the franchise that transforms the story, characters and worldview of seasons 1 and 2 of the anime, offering a more attractive gaming experience with original content and revisited design. The new game starts from the hero's story of the two previous seasons, with team battles based on the gacha system. For those new to this type of game, this system is used to allow the player a general progression, aiming for rewards - a dice is played or a roulette is turned to determine the distance to be traveled. 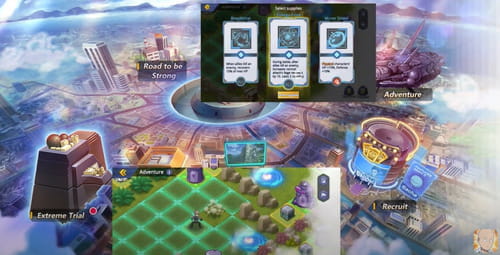 Two Strategic Battle Modes: a history mode with the full Saitama adventures and a City mode with daily and continuous challenges.
Threat level cannot be evaluated: the only thing that is certain is that one must face it, without hiding or running away. The best strategy, then, is to create a team of heroes and monsters capable of fighting Dark Matter Thieves or other dangerous and treacherous enemies.
Follow Saitama's story: it will serve as a guide and an example to tour the city and confront the enemies.
Participate in PvP tournaments: (player versus player) to train and have fun, but the most important is to follow the story mode to complete the game.
Boost your combativity: combine heroes to create devastating combos - make a character stronger than the others, gathering the best in each of the superheroes - Throwing of the justice of the unlicensed knight or the meeting of the angel of Pretty Pretty Prisoner. Know that if someone is still playing the first or second title, it is possible to migrate to the last, including with additional rewards.

Oasis Games Limited is a guarantee of safety