Download Metapad (EN)
Metapad is a program developed by Alexander Davidson which enables the user to edit texts. It runs on Windows like with Microsoft Notepad but with more additional functionalities. 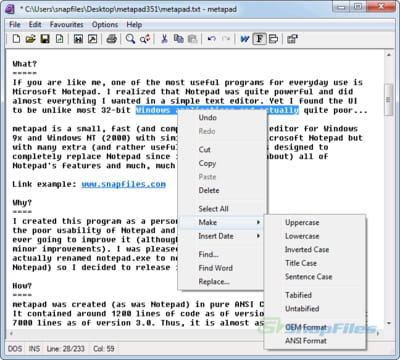 Portable: The program has a portable mode. It is possible for the user to have it even though he changes his system by saving all his activities on a external drive and it will not leave trace on the computer.


Edition: Metapad enables the user to edit texts in a classical way like the copy / paste function. He can also save or cancel the files that he edited previously. It enables to replace repeated words by other words as well.

Personalization: This utilitarian offers the possibility to the user to customize some options according to his needs. He can for instance define the font size he often uses or the keyboard shortcuts. Setting the list of the recent files is also a possibility.

The download of Metapad is completely free of charge.

The program is also available in several languages.

Alternative spelling: metapad36.zip
Latest update on June 17, 2015 at 10:42 AM.
i just love it. It stays open and is perfect for cut and paste projects both large and small!!
n