Download MetaClick (EN)
Formerly known as AutoClick, MetaClick will click for the user when he is unable to do so, or when thousands of clicks are required. It is also very useful in clicking based games. 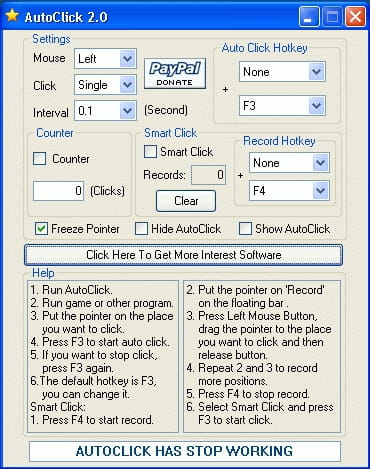 Starting the clicks: Easy and well-known, MetaClick saves the cursor's movements and the keyboard hits to reproduce them afterwards, according to the user's needs. For that, just press F3 (default shortcut) to start the auto-click. It is also possible to record the mouse sequencies with F4. After a few milliseconds, the clicks start .

Interface: The software interface is minimalist and intuitive. The menus, like "settings" and others are displayed on the interface and guide the user in the actions to perform.
Under DirectX: to avoid repeating the same moves during games, MetaClick also functions with most of the games under DirectX. It allows the user to save time and to increase the rapidity and the scores during the games.