PS3 Media Server
Download
Download Freeware (54.43 MB)
Unix Linux Windows XP Windows 2000 Mac OS X - English
PS3 Media Server has been designed to make it possible to access media files stored into the computer via a PS3 device. It is not only practical but is a easy-to-use program. 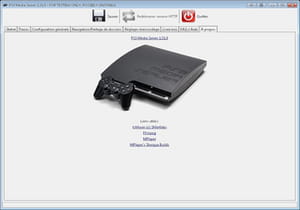 Synchronization: PS3 Media Server automatically detects the game console when connected to the same router as the computer. The user has juts to select data and clicks on the icon represented by a giant outlet and voila. Media server: a DLNA server is provided with the software for broadcasting the media files stored into the computer so as they can be viewed in streaming via the PS3. A real-time encoding is performed by this tool while playing video, audio or podcasts. Automatic encoding: PS3 Media Server comes with the best encoding and playback engines like MEncoder, MPlayer, or VideoLAN FFmpeg. Thus, sharing of files and their reading require no installation of additional codecs or configuration.

Other versions of PS3 Media Server, compatible with Linux and Windows platforms are available on the developer's website.
This is an open source application and its download is entirely free of charge.