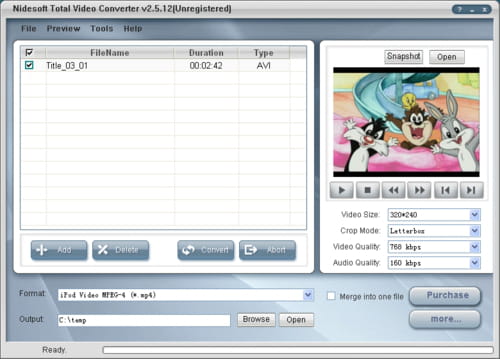 Conversion: the main function of Nidesoft Motorola Video Converter r is encoding videos. It is able to convert all data in format which can be read by a Motorola mobile phone, such as MP3, MP4 or AVI.

Video merger: with this software, it is possible to combine multiple videos into a single file. To do this, the user only has to select the videos to combine and check the "Merge Into One File".

Screen capture: Nidesoft Motorola Video Converter r also offers the possibility to take screen capture of the video being played. The user just has to play the sequence and press a button to save it as an image in BMP format.

The interface is sleek to promote a better handling.