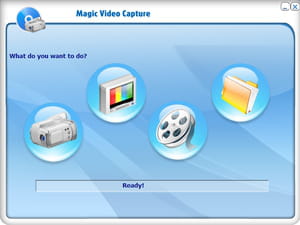 Capture and record: Magic Video Capture allows different types of recordings. It can capture images and record video and sound. It is able to shoot from the screen of a computer, a TV tuner or video camera.

Video editing: what differentiates this program is that it allows assembling multiple video and image captures and edits them. To do this task, the user only has to import the sequence in the timeline.

Formats: after capturing the video, this program gives the user the choice of the output format. It can generate almost all video formats that are most used in multimedia world such as AVI, DivX, and XviD formats.

Protection: the advantage with Magic Video Capture is that it enables to insert watermarks in the recorded video. This feature fights against piracy and allows the user to protect his creations against unauthorized operations.

Bugs have been fixed for this latest version of Magic Video Capture.

Alternative spelling: MagicVideoStudio.exe
Latest update on January 22, 2015 at 06:20 AM.
Main Points With this software, you can customize video screen size, frame rate, etc.