Download Ace Translator (EN)
Today's society requires us to know and use other languages. Ace Translator is a translator that uses a powerful machine language translation over the Internet to facilitate and optimize your translations. 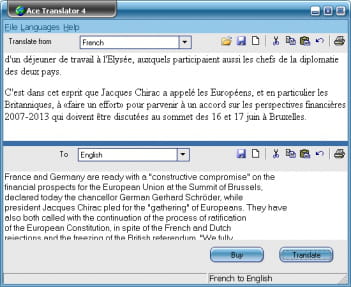 Alternative spelling: atrans.exe
Latest update on January 3, 2013 at 08:43 AM.
Ace Translator is the worst software I have ever used. It locks up constantly and when it does decide to work the translations are worthless. The support will not even answer your concerns. You are stuck with a very expensive software that does not work.
it sends tons of spam
very very usefull,...thanks
sorry I forgot to rate it, but this translator is a very nice tool
Main Points It supports 52 languages.