Not sure which antivirus program to choose? We recommend putting Kaspersky at the top of your list.

Kaspersky Antivirus is one of the best antivirus software available. It protects your PC from malicious programs, spyware, and any kind of malware thanks to its triple-layer protection method. It was developed by Kaspersky Lab. In this article, we discuss some of the software’s key features, as well as some additional information. This is the Kaspersky download for PC. 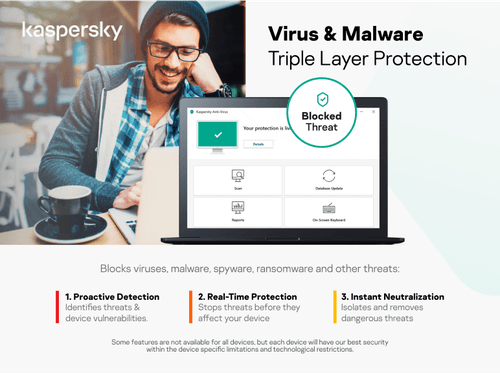 Here are some of Kaspersky Antivirus’ main features:

In 2017 Kaspersky was rumored to be working with the Russian government, however, there is still no evidence for this. In response to this, the company started their Global Transparency initiative. As always, we recommend reading the official Privacy policy before installing.

This is a free trial version that expires after 30 days of use. After that, you can get the basic yearly license for $29.99, the advanced security suite for $39.99 or the advanced premium suite for $49.99.

For the Kaspersky free download (trial), click on the green button at the top of the page.

More than an antivirus, Kaspersky also offers other plans, such as:

This version is compatible with Windows 7/8/10. You can also download it for Android.
Images: Kaspersky Official