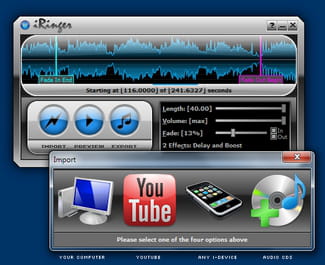 A graphical audio sequence, several edition operations and some effects makes its interface very simple to handle. It not only supports audio, but also video. Consistent, highlighting the changes and using relevant icons with labels, its interface can be used by anyone. One of its most well-known features is that it works with ALL versions of iPhone so that users can convert virtually any media format into an iPhone ringtone (M4R). There are many converting tools that scatter on the Internet but really small number of them can convert into M4R. It also converts any media format into an iPhone ringtone (M4R), iPhone text tone (CAF), MP3 format (for Android, etc.) A feature that attracts most of the users since iRinger can create a ringtone out of a video file soundtrack. iRinger graphically represents the audio you want to convert into a ringtone. One the media imported, instead of selecting the audio, you just have to drag the timeline inside the app's interface for adjustment. After that, you can choose yourself the length of the ringtone. The length of the ringtone is about 30 seconds and you can change it by changing the volume and tone output. You can delay, reverse, stem, or flang, overdrive your ringtone. You can even combine it with another ringtone and create an awesome one for your iPhone. 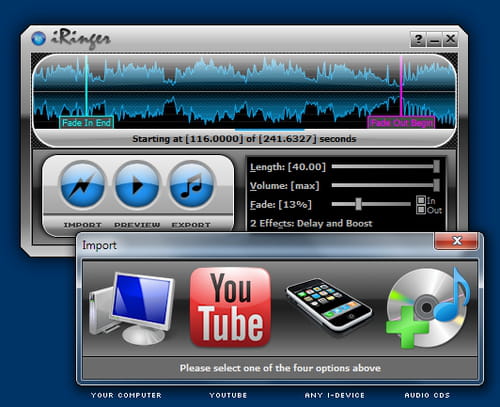