The "tape mod" method is as old as computing. It consist of hiding or bridging the pins to mislead the BIOS of a motherboard into thinking that a CPU with different characteristics has installed.

It is often the only alternative to overclock a processor of a brand PC, that lacks appropriate options in the BIOS.

The Core 2 Duo that are best suited for this manipulation are the Q6600 and 6700 quad cores, and the E4xxx dual core series.


For this to work, it is imperative that the motherboard supports the bus frequency that will be achieved through the TAPEe mod. It is obvious that if you try perform this trick on a Q6600 and a motherboard that does not support a 1333MHz bus, you will encounter, at best, a refusal to boot!! 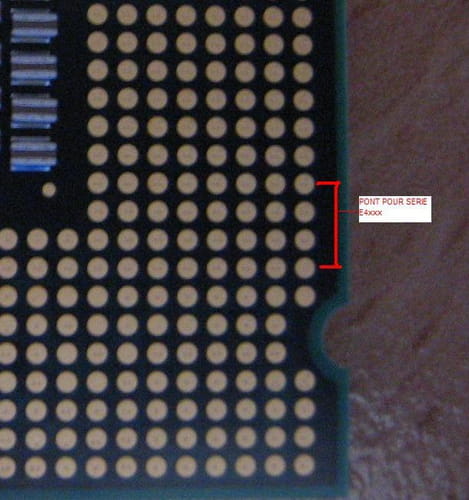 For the E4xxx series,the aim is to make a bridge between the pins designated in the above picture. The use of a conductive paste or a conductive pen is the

best way to make the bridge (beware, the heat resistance of the product used must be at least of 80 °). 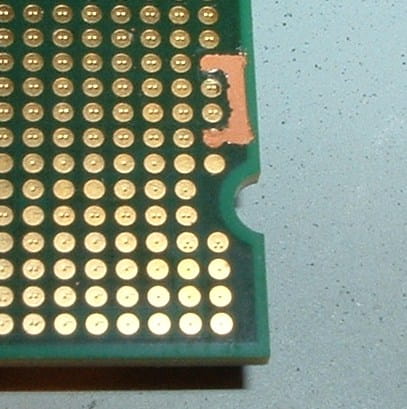 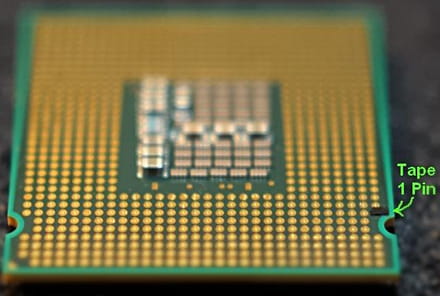 
This method has an advantage: there is nothing to change, execpt that the processor bus is increased, other frequencies (PCI, PCI Express and RAM) will be automatically re adjusted, without being overclocked. The only potential concern is that the CPU Vcore is not re adjusted for some processors.
Your processor is not mentioned in this article? Do a Google search: "tape mod" followed the model of your CPU, you will probably the necessary information.


If the internet is full of successful examples of "tape mod", there are also many cases of failures, sometimes permanent. These changes are not trivial and you have to stay humble: it does not work every time, instability can emerge due to this increase in frequency and the CPU temperature must be monitored closely.

This document, titled « TAPE MOD for Core2Duo », is available under the Creative Commons license. Any copy, reuse, or modification of the content should be sufficiently credited to CCM (ccm.net).
Previous