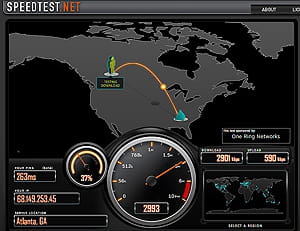 
The list below gives the correspondence between the speed (bandwidth) expressed in bits per second and throughput :

Why there's a difference?


Byte is the translation of byte (not bit).


Note that: the speed varies from one ISP to another.

I have an ADSL xxxx, but when download data, its speed drops?


The speed of an ADSL line is the theoretical maximum throughput possible.

If the server where you're downloading is able to send you only 3 Kb/sec, you will receive 3 Kb/second, even if you are usin ADSL 8192. Your ISP is not the one responsible!

The upload speed is too slow!


Upload speed does not exceed 64 Kb/second.

Test the speed of your ADSL


The tests results can be altered if you are downloading data or making use a VoIP phone at the same time, its better to avoid making use of your Internet connection during the testing phase.

This document, titled « ADSL - Test the speed of your internet connection », is available under the Creative Commons license. Any copy, reuse, or modification of the content should be sufficiently credited to CCM (ccm.net).
Previous