While Windows adopts a monolithic kernel architecture, Linux is composed of a multitude of "bricks" software. 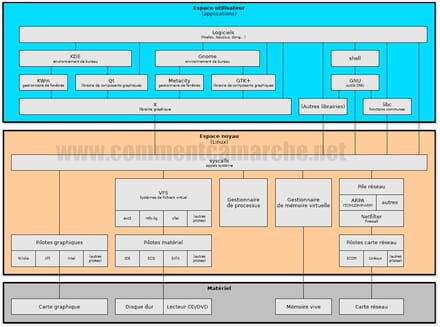 
The kernel space is the heart of the operating system. It manages the hardware (disk, video card, network ...) and provides access to software and libraries located in the user layer.


This scheme is simple:

There are thousands of bricks software available for Linux. They are in the form of executable or library.


In the above diagram, the window manager KWin and Metacity are shown, but there are dozens more availble.

This document, titled « The architecture of Linux », is available under the Creative Commons license. Any copy, reuse, or modification of the content should be sufficiently credited to CCM (ccm.net).
Previous

K3b installation of the MP3 codec